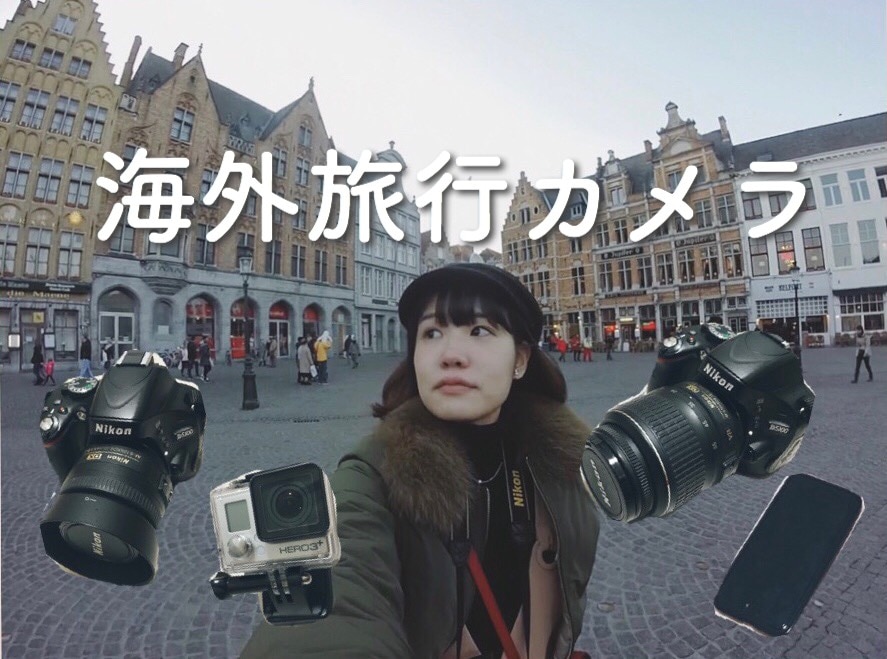 I went to Belgium / Holland on my family trip last week! It was a week's trip, but every day we saw beautiful scenery and eat delicious food and go to bed ... Even if we did not say the least, it was the best days. I will upload it to my blog soon.

This blog about "belongings" that bothers me when preparing for travel. When traveling we will minimize luggage as much as possible, but the exception is the camera.

I also worried whether I should bring something (among the few beginner cameras) this time, or just want to buy a slightly better lens.

Until the day I had trouble watching camera blogs, reviews of Amazon and price .comIn the end I will not buy new, this time I will bring these fourDid.

IncidentallyThe SLR body is Nikon's D5100is. Since I am a beginner camera, the content of the article is also for beginners of the camera.

If you are a camera doctor, iPhone can not have photos! There is a possibility that it may not be useful for those who want it, so do not worry. .

What camera did you use most while traveling to Europe?

Well, "Which camera do you use most when traveling?" Everyone is the most interesting place, is not it?
When answering from the conclusion, it was the result of such feeling!

This time I finished a week's trip,I tried out ranking based on the number of pictures actually taken while traveling!

Surprisingly, beyond the single - lens reflex, iPhone is ranked number one. From the camera lover you can hear the voice "Is not it so! Sweat

Despite having a single eye, there are reasons to use the iPhone so much, so I think I will write in detail the actual use, merit and demerit of each camera.

Although it may be disappointing whether it is eventually an iPhone or not, the iPhone was really easy to use with actually traveling.

There are two reasons.

① I do not mind shutter sounds almost

I think that this was the big reason I used the iPhone most. When you want to take pictures in rapid succession, you need to worry about the sound of "SLOW" GoPro 's "PI" in single lens reflex.

Because iPhone is almost not in the live mode, no sound can be heard, so we were able to shoot Bashibashi in any scene. There are many scenes that it is better not to give a big sound such as an art museum or a church, especially in Europe.

This is a view of the church taken with iPhone.

② It is easy to ask shooting

It was also a family trip this time, and there were many that I asked people who do not know at all to ask me to take pictures of the whole family. At that time, if it is a smartphone that everyone used, shooting will go smoothly.

Is it a case that I am sorry to have been blurred even if I took a picture like "Please press this button long for a single eye"? Memory of the trip I felt it was the strongest iPhone to keep it smart.

I got this by my sister. Lol

The second most commonly used one is a single lens reflex Nikon D5100 with a standard zoom lens (18-55 mm). Although it is less than iPhone, I have taken more than 1,200 photos.

I also brought a monofocal lens but I was using the zoom lens overwhelmingly during the trip. As we moved in a limited time and photographed a momentary photograph a lot, it is important how we can set angle of view and composition at once.

It can also be used to take a historic building at wide angle. It is best to take shadows in the river.

I thought that a standard lens would be a bit of a thing, but it was a trip that felt quite versatile.

The third place is a single lens reflex Nikon D 5100 with a single focus lens (35 mm) attached. I always kept it as a lens instead of a bag while I was moving.

I can get a deep blur that can not be done with standard lenses, so I am excited to take it. In eating places where lenses can be exchanged slowly, it was often changed to single focal point and taking food.

It was not a hassle to replace the lens during the journey, but it was luggage that I had to carry the lens all the time.

I am happy, but absolutely not necessary. Changing to a single focal point was not so frequent, and only the result 200 copies were photographed.

There are still things that I am not accustomed to taking with a single focal point, it was difficult to decide the composition. Because the zoom can not be done, the good or bad of the work is decided depending on where you cut it.

And, the camera that I did not use most this time was GoPro. Do you use it in the first place? Because I thought it was a camera I brought with my insurance policy. (Excuse me to GoPro w)

Honestly I think that I did not have to worry if I did not have GoPro, but there were quite a few times I thought it was good to have taken it because it is Europe with many buildings!

When you go to the old city hall and where the royal palace is, the 360 ​​° building is wonderful. I hope that there will be a GoPro that can show in wide angle in such a case.

Since I was taking photographs with quite a single person freely, nobody took pictures but I was able to spend my own shots. .

Which camera should I bring to Europe trip after all?

I do not think anyone would not bring an iPhone (smartphone), but I was noticed again all-around.

However, of course, the single eye is better than the sense of blur and image quality, and GoPro is the best feeling if you want to put all the scenery in wide angle.

Although it is heavy while moving, all people who like to use various cameras for each scene do not feel bad at all. On the contrary, I enjoyed being able to choose variously!

What I thought when I was traveling in Europe. I should have bought it when I stood in the center of a beautiful square! What I thought360 ° camerawas.

Although GoPro is super wide angle, 360 ° can not be photographed. If you press the button, you can shoot like a circle, I want that 360 ° camera! I thought.

In addition, although I saw a drone with a BIC camera before traveling, I gave up thinking that I would take a trip and take it for a trip. I want to skip drones slowly when I go to a resort.

Today is here. Next let's meet on a travel blog!

Became an OLYMPUS user from Nikon!

I bought an OLYMPUS camera with paypay! Discount and breaking reviews! | Wishing for